Sorry that I have not been posting on my blog. But I have had a busy end of year. My father died on November 2,2011 after having a major stroke. But of course I have been reading about all the royals this month. I wish you all the blessing on this new year!

Tracey
Posted by Tracey Ellen at 9:09 AM 2 comments:

It has been confirmed by the palace that senior members of the British Royal Family phone lines have be hacked. Phone numbers were sold  by those that are in charge of protected the Royal Family. Rupert Murdoch's News International has been charged with getting information thru payment according to police official in London. Why does this angry me well I am going to rant for a bit you can agree or disagree. The British Royal Family is allowed to have a private life. Without the glare of media period! They share enough with us thru public engagements or weddings or tours to other counties.Why can't the Queen or Her Son Prince Charles have private talks with others. How would you feel if your conversation where printed for all to see.


Rupert Murdoch has alot to answer for in regards to this matter.  Mr Mudroch how would you feel if I or anyone taped your phone lines. Think about Mr Mudroch?


To read more on the story
http://www.dailytelegraph.com.au/news/queen-elizabth-and-prince-charles-latest-alleged-hacking-victims/story-e6freuy9-1226093038374
Posted by Tracey Ellen at 2:41 AM 2 comments:

Email ThisBlogThis!Share to TwitterShare to FacebookShare to Pinterest
Labels: amil

Thanks to everyone that comes to the blog! I hope you enjoy it as much as I enjoy writing it!
Posted by Tracey Ellen at 8:53 PM No comments:

Duke and Duchess of Cambridge

This was the first tour as married couple.. one of many. I have been so impressed with how Duke and Duchess carry themselves in all events in Canada. From planting a tree next to tree William's parents planted in 1983. You could see in William's face that he was thinking of both his parents.After all they are his parents. No matter what is said about the Wales marriage they raised a son that is full of compassion for others. Talking to a little girl with cancer to getting down on their level. Was learned by his mother to him. He is no longer that little boy that we watched grow up, he is a grown man. That is now married to someone that is very much her own women.

Catherine Middleton(HRH Duchess of Cambridge) is stunning in her own way. We have watched her grow into this role first as girlfriend and then his fiance and now his lovely wife. Catherine is lovely in her way. Smiling and happy and glowing. She was so sweet little girl with cancer and talking to students. Just down to earth. Looking stunning in her outfits. Her main job as wife of Prince William is to give support and love to her husband.

I was so impressed with both of them. I think anyone that follows the British Royal Family should be proud of the future of this family. God Bless William and Catherine!
Posted by Tracey Ellen at 2:25 AM 2 comments:

Welcome to United States TRH Duke and Duchess of Cambridge!

William and Kate arrive in LA

AFP press pool
The Duke and Duchess of Cambridge, William and Kate, exited an Airbus 310 Canadian military jet at LAX.


Mail Print Comment
The Duke and Duchess of Cambridge touched down at LAX Friday afternoon to kick off a whirlwind weekend of meetings, charity events and photo opportunities. The couple were greeted by Gov. Jerry Brown and Mayor Antonio Villaraigosa.
Photographers from around the world let their trigger fingers fly as they snapped pictures of William and Kate exiting their plane at the West Gate of LAX.
"Welcome to California," Brown told William as they shook hands. As a gift, the governor reportedly prepared an iPad 2 loaded with California themed music from the Mamas and the Papas, the Beach Boys and LL Cool J.
The two left the airport in a black Range Rover SUV with police escort.
Their weekend is booked solid with events. On Saturday William will play in a polo match in Santa Barbara. Proceeds from the tickets will benefit the American Friends of The Foundation of Prince William and Prince Harry. That's the American wing of the royal brothers' charity which supports at-risk youth, veterans and the environment.
Saturday night the couple hit a red carpet party hosted by the British Academy of Film and TV Arts. Celebrities like Tom Hanks, Nicole Kidman and Jennifer Lopez are on the guest list. Rising stars of the British film and TV industry will also be at the event.
On Sunday the couple stop at Skid Row to meet with youth from Inner-City Arts, an arts education organization in the heart of downtown LA. Then they head to Culver City to attend a job fair for U.S. servicemen and women before boarding a plane back to England.
Posted by Tracey Ellen at 1:22 AM No comments:

'My Mommy is in heaven with Diana': The heartbreaking story behind the little girl who dreamed of meeting a princess... and melted Kate's heart

With stage four cancer, little Diamond Marshall may not live to see her dream of meeting Sleeping Beauty's Princess Aurora at Disneyland.
But the six-year-old came pretty close yesterday when she was invited to present a bouquet of flowers to the Duchess of Cambridge as she arrived in Calgary, Canada.
Diamond was so thrilled by the opportunity, that instead of passing across the bouquet, she flung herself forward for a hug, much to Catherine's delight.

Dream come true: Six-year-old Diamond Marshall, who was chosen to present a bouquet of flowers to the Duchess of Cambridge, was so thrilled, she leaned in for a hug, much to Catherine's delight

Token: Diamond, pictured before her diagnosis, gave the Catherine a friendship bracelet
As well as the colourful posy, Diamond also presented a heart-shaped trinket box, containing a friendship bracelet she had made for the Duchess herself.
It was a rare moment of joy for the youngster, who has been suffering from undifferentiated sarcoma, a rare childhood cancer that affects the body's soft tissues.

Since her diagnosis in February, she has been through surgery and spent weeks in and out of hospital, and has lost her hair due to chemotherapy treatment for the tumour on her abdomen.
Her illness is fresh hardship for the family following the loss of her mother, Memory Marshall, to a different cancer four years ago, at the age of just 32.

Emotional boost: Diamond, who is battling a rare cancer, has always dreamed of meeting a princess

Battle: It was a moment of pure joy for the youngster, who is undergoing chemotherapy for a rare cancer
Today, Diamond's stepmother, Danielle Marshall, 32, told MailOnline how she and her husband Lyall, 37, made the kindergartener's dream a reality.
Well aware of his daughter's love for all things princess-related, Mr Marshall had mused: 'Maybe she should meet Princess Kate... She will be coming to Calgary, after all.'
The response was overwhelming enthusiasm from Diamond, who wrote a touching letter to the Duchess expressing her desire.
It read: 'Dear Princess Kate. My name is Diamond Ann. I am six. I was named after Princess Diana. My Mommy Memory is in heaven with her.

Playing princess: Diamond, pictured before (left) and after she lost her hair, has just finished Kindergarten
'I have cancer. I spend a lot of time at the hospital. I watched you get married from my bed there. You looked pretty.

Fresh hardship: Diamond's mother, Memory, died from cancer at the age of just 32, four years ago
'I like playing Princess dress up. My favourite princess is Aurora. Who is yours. I would really like to meet you. Do you wait [sic] to meet me too? '
A few days later, Mrs Marshall called the Children's Wish Foundation of Canada to see if there was anything they could do.
'I called them and said, this is going to sound crazy,' she revealed. Mr Marshall also sent the organisation a letter of his own.
He wrote: 'We realize she may not have the chance to go to Disneyland where she wants to lunch with Princess Aurora of the fabled story Sleeping Beauty.
'Should the Duke and Duchess of Cambridge just happen to swing by for a little visit, it would go a long way for helping her spirits, her surrounding family and friends.
She is in awe of Princess Kate's fairytale-like story.'
At the beginning of June the family learned that Diamond had been chosen to present the Duchess's bouquet - though they were all required to keep the news a secret - even Diamond.

'I'm not sure she managed to keep it a secret from her friends,' admitted Mrs Marshall, who is mother to Diamond's little sister, Freya, 23 months.
After her meeting with the Royal couple, Diamond said: 'She told me she liked the flowers a lot.
'She was as fancy as she looks on the TV.'

Undifferentiated sarcoma is a very rare childhood cancer that affects the body's soft connective tissues.
Symptoms include pain or swelling in the affected area. If the tumour is particularly large, it can press on other organs, affecting their performance.
According to Cincinnati Children's Hospital Medical Center, which specialises in treating children with high-risk cancers, no single treatment method appears to be successful alone.
The usual course of action includes surgical removal of the tumour, chemotherapy and sometimes radiation.
A treatment plan will be based on which part of the body is affected, whether the tumour has spread, and how much of it could be removed in surgery.

Source: cincinnatichildrens.org
Mrs Marshall, who stood close to the little girl throughout the meeting, told how the Duchess complimented Diamond's dress.
She said Catherine was 'so lovely and so gracious. For a little girl who has dreamed of meeting a princess it was a dream come true.'
Mr Marshall added: 'This is so great for her health - it's such a boost for her emotionally, and for her strength.'
Though Diamond is currently in and out of hospital for chemotherapy sessions, Mrs Marshall says that she is responding well to treatment, and that her tumour is shrinking. She is scheduled for further surgery in mid-August.

Diamond's dream was made possible thanks to the Children's Wish Foundation of Canada.
This year, the Foundation expects to grant 1,000 new wishes and grants nearly three wishes every day.
Each wish is an individual adventure, carefully structured to meet the needs of a particular child and family. For more information visit www.childrenswish.ca
Posted by Tracey Ellen at 12:20 AM No comments:

Congrats to TSH Prince Albert and Princess Charlene of Monaco!

What a beautiful wedding in Monaco. I have to say I love weddings and royal wedding is always a beautiful one. Princess Charlene look so beautiful and radiant and happy. Prince Albert looked so happy. I was so thinking of his mother Princess Grace. Best Wishes to the new royal couple.. 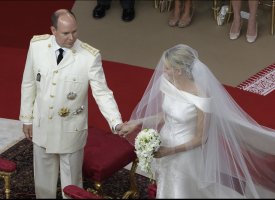 Posted by Tracey Ellen at 12:41 AM No comments: